One of the most peculiar forms of movement is standing still. And no one can stand still like a guard of honor does. They are known from official buildings all around the world, those uniformed men, who, like the proverbial tin soldiers, perform their duties to the left and to the right of the entrance. Oftentimes they are photographed, people try to make them laugh or try other jokes.

Nothing seems to be more far off for our frantic society, than standing to attention. That this standing still is itself a form of movement, is usually overlooked. As a matter of fact: One cannot not move. The blood is pulsing, something is itching on the side of the shoulder, some dry tickly cough is making its way. All of that has to be dealt with in the mind. And again something is moving.

The honor guard of the Austrian Armed Forces has expressed its willingness to offer a technical training in the art of standing still in the frame of BMfB. What happens in the mind when the body is still? Which strategies can we use in order to attain a state of apparent stillness? A Yoga class of a special kind, that deals to no less an extent with the use of ones own body. Thanks to the commitment of the Guard, the BMfB can widen its range into a field, that is not yet offered in weekend-courses. 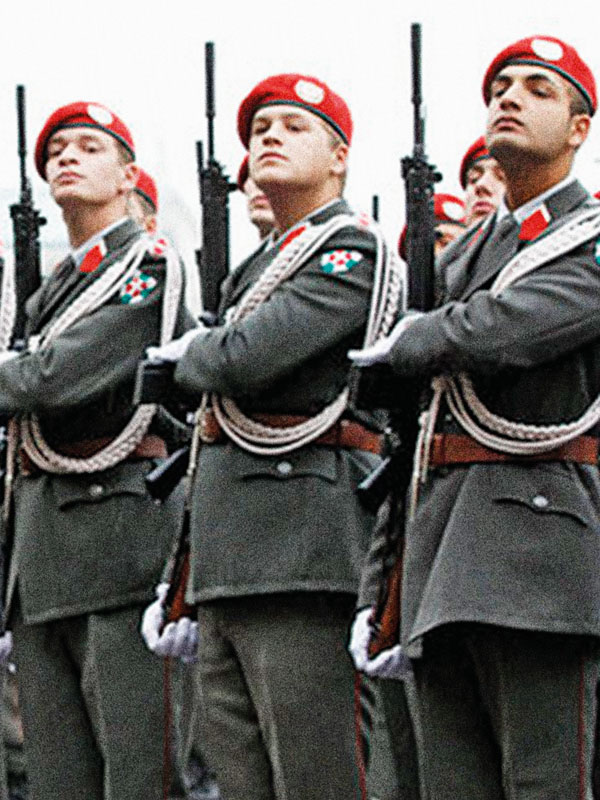 The choreography of the Honor Guard of the Austrian Armed Forces.