The Dept. of Movement Affairs if the Swiss Confederation (EDfB)

In the framework of the “Plan for the International Promotion and Distribution of the Activities and Principles” of the BMfB the initiative for the founding of a Department of movement Affairs of the Swiss Confederation was launched.

To provide the appropriate basis for its activities, the EDfB shall propose the amendment of Article 10.2 of the Constitution, now reading “Every person has the right to personal freedom of movement, in particular the freedom to movement and physical and spiritual integrity” by adding that “the individual right to movement of the body in space shall be protected and fostered by the Department of Movement Affairs.”

Movement ranks, in various ways, already high on the agenda of a number of other departments in Switzerland. The particular task of the EDfB will consist in promoting movement from being considered a minor matter to becoming a major affair. Freely paraphrasing the EDfB‘s credo – “An alternative movement is possible” –, the EDfB shall cluster and foster movement in all its facets. In contrast to the economy, where movement is assigned but a target-oriented role (e.g. transportation and logistics), and in contrast to sports, where the idea of competition is becoming increasingly prominent, the EDfB shall primarily promote the creation of spaces for free forms of movement, and create opportunities for facilitating the exploration of new, and hitherto unimaginable movements.

The EDfB is committed to assist citizens in de-disciplining themselves without running the risk of losing self-control. Here the fundamental maxim of diversity is key: different corporeal experiences are important in different domains. As is generally held: Movement is our Capital. 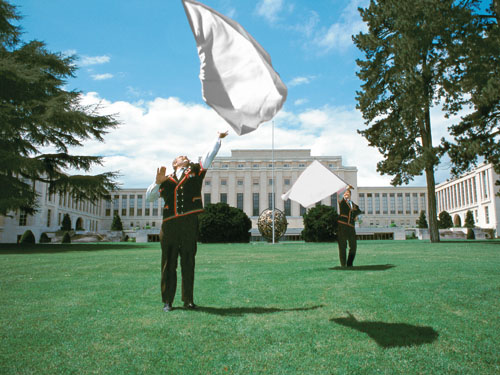 The duo Kobel, father & son, the eldest and youngest flagwavers-Swiss champion in front of the Palais des Nations, Geneva